While searching about for intersting stuff on the BattleTechVerse I found this forum thread, "The moment Battletech jumped the Shark."  That discussion quickly suffered topic drift and wound up focused on Lynn Minmay and the power of song.  But what I think to be much more interesting is the bit of the opening post that says,


With those old authors, you get the sense they actually thought a minute about how mercenary units might work. It was a primary derivative work, derived from lots of reading history books and non-fiction books on military.   The "Northwind Highlanders" as depicted in the nineties book OTOH are a romanticistic wish fulfillment of the author, based on reading Battletech novels and Battletech sourcebooks AND misinterpreting them.

I don't want to be in that second catagory, so if BattleTech had an Appendix N: Inspirational and Educational Reading then what would be in it?  Name some non-fiction books... oh, why discriminate?  Can you name any books (whether non-fiction, fiction, colouring, pop-up or scratch-n-sniff, but under no circumstances BattleTech) which ought be included for a BattleTech bibliography?

Really, I don't know.  That's why I'm posing the question.

I really ought not waste much time internetting around today because I've got some final preparations to make for a playtest tomorrow of some house rules meant to fit the mecha of BattleTech (or MechWarrior, or whatever they're calling it this year) into Mekton.  But I will take this opportunity to post a draft of the mecha record sheet it'll use. 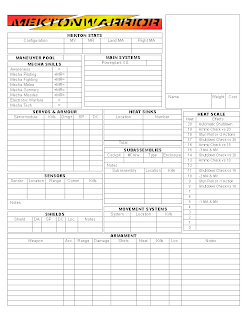 No promises, but perhaps tomorrow I'll write about my take on this recurring meme among Mekton gamers. 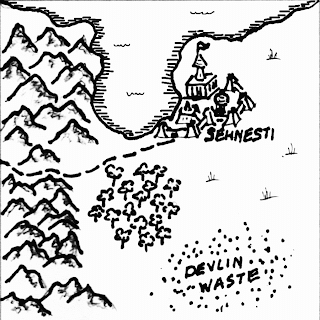 Just testing to see how a wilderness geomorph looks inked.  Lines came out too heavy for my liking, so it's back to pencil only.

Oh, and the number seven thing.  I wouldn't want to inflict some really crummy geomorphs on you nice people. 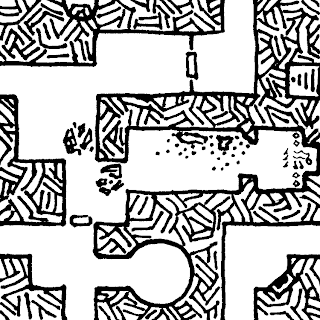 Instead of writing some DungeonWords, I tried drawing them.

I do enjoy the setting of old Battletech.  Before the Clans.  Before Michael bloody Stackpole.  Even before William H. Keith (whose praises I can not sing highly enough, so I best not start) wrote the fine tale of how his Gray Death Legion found the technical archives of the fallen Star League stored on an overgrown USB stick.

Turn to page 38 of the original Tech Readout.  Go to the bottom of the third column to read about MechWarrior Fletcher Raymond and his Clint.

That Martel medium laser represents a full third of the Clint's total firepower.  The First Succession War ran from 2787 to 2821.  This Clint has been carrying that damage for more than two centuries.  And that's normal.  Read the old unit & scenario books like Black Widow Company, Fox's Teeth and Cranston Snord's Irregulars.  The 'Mechs listed have at least a 50% chance of being in less than perfect repair.

In 3025 the BattleTech universe was in technological decline.  They were fighting for spare parts.  For some reason that appeals to me.  Or maybe it's the sense of unknowns and potential that one gets from the early days of any game.  Either way, I've been going over the oldest BattleTech books I can lay hands on.  The first edition MechWarrior RPG looks to be lots of fun.  It's full of charts to roll on.  Random 'Mech acquisition, unit affiliations, duty assignments, encounters and major astropolitical events.

It's that last one that really grabs my attention.

Instead of cleaving to the official BattleTech timeline, I want to roll on the major events chart and see what happens month by month.  I gave it a little test drive.  January 3025, first thing that happens is a major campaign starts up along the Free Worlds League/Capellan Confederation border.  A bit odd, considering that they had just signed a big agreement to cooperate against the Federated Suns/Lyran Commonwealth alliance.  Ah well, on to February.

Fall of a major world.  Andurien, in the Free Worlds League.  Looks to me as though Dame Cathy Humphries made her move to seccession about five years too early, and got stomped fifteen years ahead of schedule.  Probably the League and the Capellans coordinated to finish this in just a month, strengthing their alliance perhaps?  Hmm.

So that's what I want to run.  Same starting point, but no way to tell where it's going to lead.  However, fun as the random charts are, I don't want to use the whole rule set of first edition MechWarrior.  Right now MicroMechWarrior greatly appeals to me for being light weight and quick to pick up and fiting nicely into BattleTech.  But I just can't go that way because in my noggin nothing says roleplaying and giant robots more than Mekton. 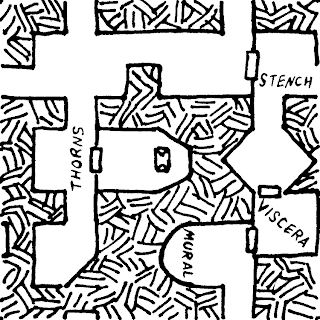 I wanted to see how the borderless look would come out. Seems OK to me, so for the sake of Dave's Mapper I'll go with it.

But now I have to erase the borders on the old morphs.  Good thing there's only four of 'em :)

I suppose I should have another go at the wilderness tiles, too.